After a while of nothing it’s finally time again for another haul. Lately I’ve purchased quite a lot of bibs and bobs and I really wanted to share those with you guys.  I ordered a few things from sites like feelunique, Douglas, Rituals, The Body Shop & a few other sites and today I’m going to show you what I got. If you’re interested in finding out what I bought, keep on reading!

The first two things I bought are two shower foams by Rituals. The first one is from a limited edition. It’s called Mandi Lulur and it comes in a really pretty white bottle. I love the look of it and I’m in love with the scent. I never really tried one of the Rituals shower foams so I was really excited to try one, and so far I’m really loving it.

I also bought one in the scent T’ai Chi. It was on sale and I just really enjoyed the scent. I actually accidentally bought two of it, but because it’s such a nice scent I don’t mind that at all. I also ordered a big gift set by Rituals which was on sale for a very reasonable price. The set came with a few full size and a few travel sized products which I really wanted to try. The first product that comes in the set is the T’ai Chi Shower Foam. It also comes with a bed & body mist, the Mei Dao Body Cream, the Wai Wang body crub and lastly a bath cream. I really like the scent of the products and so far I like the way they work too. At Ici Paris I came across these really cute Invisibobble hair rings.  These are smaller than the regular kind and I really like that about them because I just don’t have that much hair. I have used them a couple of times now and I have to say I really enjoy using them. They are way better than regular hair ties.

For Christmas my best friend got me a few gorgeous gifts. First off all she got me the TBS Cranberry Scrub, which smells absolutely incredible. She also got me the lipbalm from that collection which I absolutely love and a really pretty nail polish by Essie which I have reviewed already.

My other best friend also got me a gift, a really pretty necklace, but because I was wearing it and it was a little difficult to photograph I didn’t, but I still wanted to let you guys know that she got me that. Thanks a lot girls! Next up is the Beautyblender. I’ve been wanting to try it out for so long and now I finally bought it. I never really bought it because I didn’t have too positive experiences with replica’s of it which I have tried, but because so many people are so positive about it I still decided to buy it, and so far I’m loving it, so I don’t regret it at all. 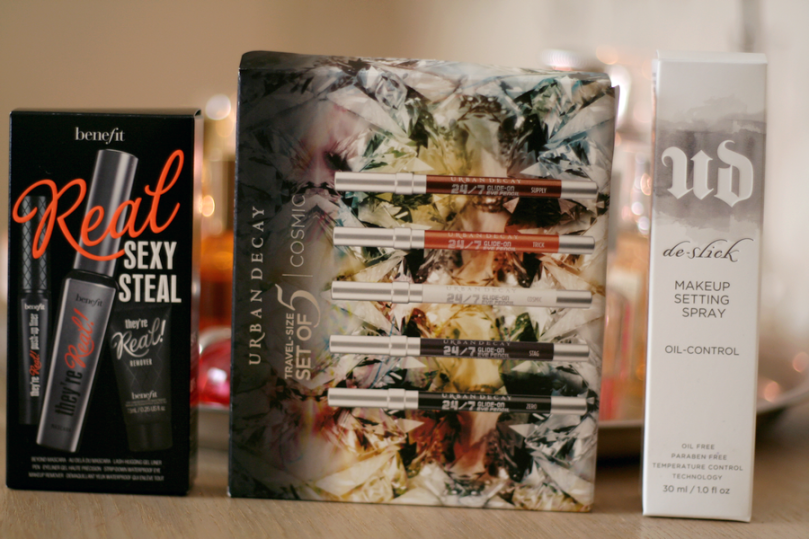 I also got another Benefit product. For Christmas I got a super cute Benefit Gift Set which included a sample of the They’re Real mascara and I fell in love with it. I loved it so much that I decided to just purchase the full size version. Because this set which includes the full size version of the They’re Real mascara, a mini eyeliner and a mini removes costs equally as much as the mascara on its own I decided to buy this little set.

I also got two products from Urban Decay. First off all I got a set that includes 5 travel size Glide On Pencils. A while ago I fell in love with these pencils and therefore I really wanted some more colours. This set seemed like the perfect opportunity to grow my Urban Decay Glide On Pencil collection and because I loved the colours I decided to buy it.

I also got the Urban Decay De-Slick Makeup Setting Spray. I already reviewed it, so if you want to read an in depth review about it in which I tell you why this is such an amazing product, you should go ahead and read that. But in short, it’s the best product I have ever tried in my life.

For the longest time I have been wanting to try a product by the brand Tarte, but it’s just really difficult to get your hands on here in Europe. A while ago that changed. I found out that the UK QVC site sells Tarte products and that it ships to the Netherlands and when I found that out, I had to order something.

I ended up ordering the gorgeous Tartelette 2 In Bloom Palette, which is just absolutely stunning. I’m really excited to give it a try and see what it’s like! I also got some Sleek goodies. I really like the brand Sleek and when I saw that some of their products were on sale on one of my favourite webshops I decided to buy a few things. I first of all bought two of the Pout Polishes, which I have been wanting to try for ages now. Second of all I bought one of the Blush By 3 palettes and lastely I got a lip palette. I also ordered three Maybelline blushes from that same webshop. Two of them are from the Blush’em range, which I have never seen before and one from the Jelly Glow range, which has been on my wishlist for quite a while now. 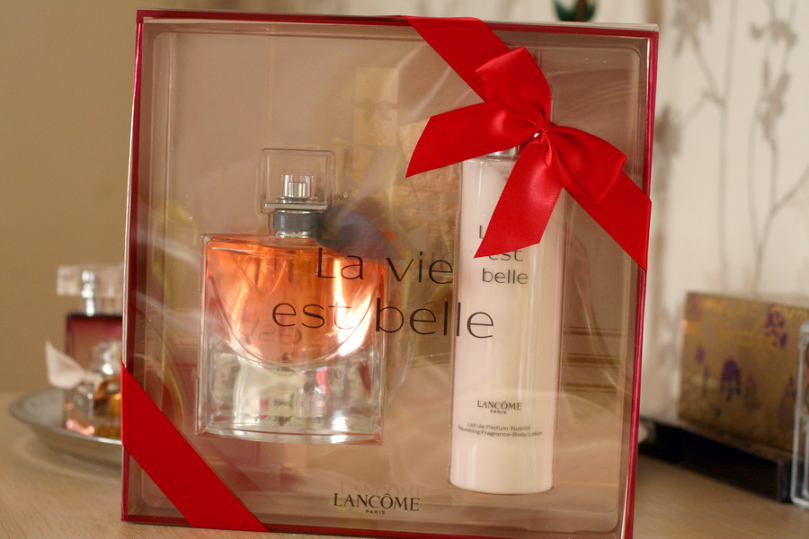 A while ago my best friend made me smell the perfume La Vie Est Belle. I expected not to like it too much, but I ended up falling in love with it. It smelled so incredibly good, but it was so super expensive that I was convinced I would never really end up buying it.

Lastly I bought a few goodies from The Body Shop, since their January sale is happening right now and there are some amazing deals going on. The first product I got is the Tea Tree Cool and Creamy Wash. Lately I’ve been struggling a lot with my skin so I’m hoping this will work for me.

Secondly I got the Frosted Plum body butter. I’ve been wanting it ever since they launched it this Christmas and now I finally got my hands on it. It smells absolutely incredible. From that same range I also got the lipbalm, as well as the lipbalm in the Frosted Cranberry and Glazed Apple scent. These lipbalms are my absolute faves so I really wanted to stock up on them. The last three Body Shop products I got are three showergels. The first one is called Madagascan Vanilla Flower. I had never really smelled it before, since it never really caught my eye, but this time I decided to just sniff it. And oh my lord, this smells absolutely incredible. It’s literally the best smelling thing I have ever smelled and I’m really glad I bought it.

The other two showergels are both from the Christmas collection. I already have the showergel in Frosted Cranberry and now I also have Frosted Plum and Glazed Apple. Both smell really good and are just amazing to use. I love them a lot!

And that was it for today’s haul. I know it was quite a big one, but I hope you enjoyed reading it. Be sure to let me know which products you want me to review first and let me know what you have bought recently!

This site uses Akismet to reduce spam. Learn how your comment data is processed.

Nicolished is my personal beauty blog filled with everything you might want to know about beauty: lots of reviews, favourites and other interesting things.

I post every single day at 6 AM. If you don't want to miss anything make sure you following me via Bloglovin' or Twitter!